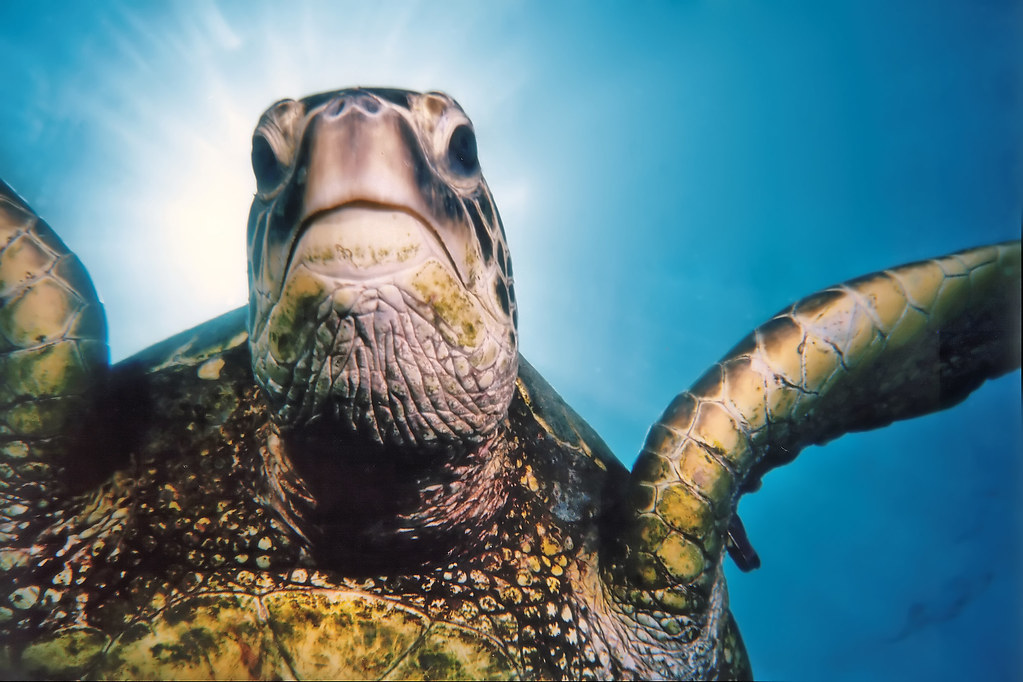 The Best Acupuncture Point for Longevity - In Celebration of World Turtle Day!

Turtles have been around since the age of the dinosaurs and are a symbol of wisdom, endurance, wealth, and long life in traditional Asian culture. Turtles were historically considered to be one of the four sacred animals. Legend has it that a turtle carries the world on its back and the secrets of heaven and earth in its body.  Because the marks on its shell were considered to reflect the influences of heaven and earth, the turtle became the inspiration for the I Ching, a foundational work of Chinese philosophy that has influenced nearly every aspect of the culture for over 4000 years.  Acupuncture points also have symbolic characteristics, and there's one in particular that exemplifies the nature of the turtle and makes a significant contribution to health and longevity.

In celebration of World Turtle Day, and to help you in your own quest for wisdom, endurance, wealth, and long life, start a habit of daily acupressure practice with one of the most important acupuncture points on the human body - Zusanli, also called ST36.

Zusanli means “Leg Three Miles”, and like the patient and persistent turtle who slowly roams around the galaxy, carrying the earth on its back, this is a point for endurance. Stimulating this point when tired, is said to enable one to walk an additional three miles. Endurance is so vital to success that the famous Jin dynasty physician, Ma Dan-yang, included Zusanli in the constellation of Heavenly Star points - the most important points on the body. Over time, its use became even more popular, and the great Ming dynasty physician Gao Wu identified it as one of the four “command points” of the body and used it in treating all abdominal disorders.

If you are pursuing wisdom and/or wealth, Zusanli can help you in your efforts. The pursuit of wisdom and wealth are earthy pursuits that can be very taxing to the body, so it's important to have adequate Earth energy in order to succeed. Zusanli is the Earth point of the Stomach meridian - the yang organ associated with Earth energy, and so it has a strong influence on removing roadblocks to success.  Zusanli revives the yang, restores consciousness, fosters the original qi, supports the correct qi, tonifies qi in general, and nourishes blood and yin - in short, it excels at correcting energy imbalances, restores and supports vitality, and enables you to utilize nutrients better. It also clears fire and calms the spirit. If that seems overwhelming, don’t be put off by unfamiliar oriental medicine jargon. From a Western medicine perspective, fMRI studies have shown that stimulating ST36 adjusts neural activity in both the brainstem (which controls digestion) and the limbic system of the brain (which is involved in the comprehension of emotional meaning and the generation of emotional responses).1 Just think what you can achieve when you bring a well-nourished body and an energized, peaceful and creative frame of mind to solving whatever problems lay before you! That's why Zusanli has been so important for thousands of years, and why it should be part of your own Heavenly Star constellation of personal acupuncture points as well.

Zusanli’s association with longevity is related, in part, to its ability to support the digestive system. There is an old saying, “Stomach qi is the root of man”. This means that in order to live a long life, free of disease, we first need to eat a nutritious diet and then be able to digest and absorb what we eat. Modern researchers have shown that the decline of lean muscle mass as we age is a common problem that leads to a reduction in physical performance, increased susceptibility to illness, and loss of autonomy. This is, in part, due to a reduction in our ability to process slow-digesting proteins as we age.2 However, muscle mass (and, by extension, good health, and autonomy) can be maintained, even in the elderly, when amino acids are readily available3 - demonstrating the importance of having a digestive system that is healthy enough to break proteins into their constituent parts. Strengthening Stomach qi with Zhusanli can help preserve the function of your digestive system and contribute to a long and healthy life. In fact, it’s so important that it’s recommended that everyone over 30 should stimulate ST36 on a daily basis

So where is this wonderful point for endurance, wisdom, wealth, and longevity? 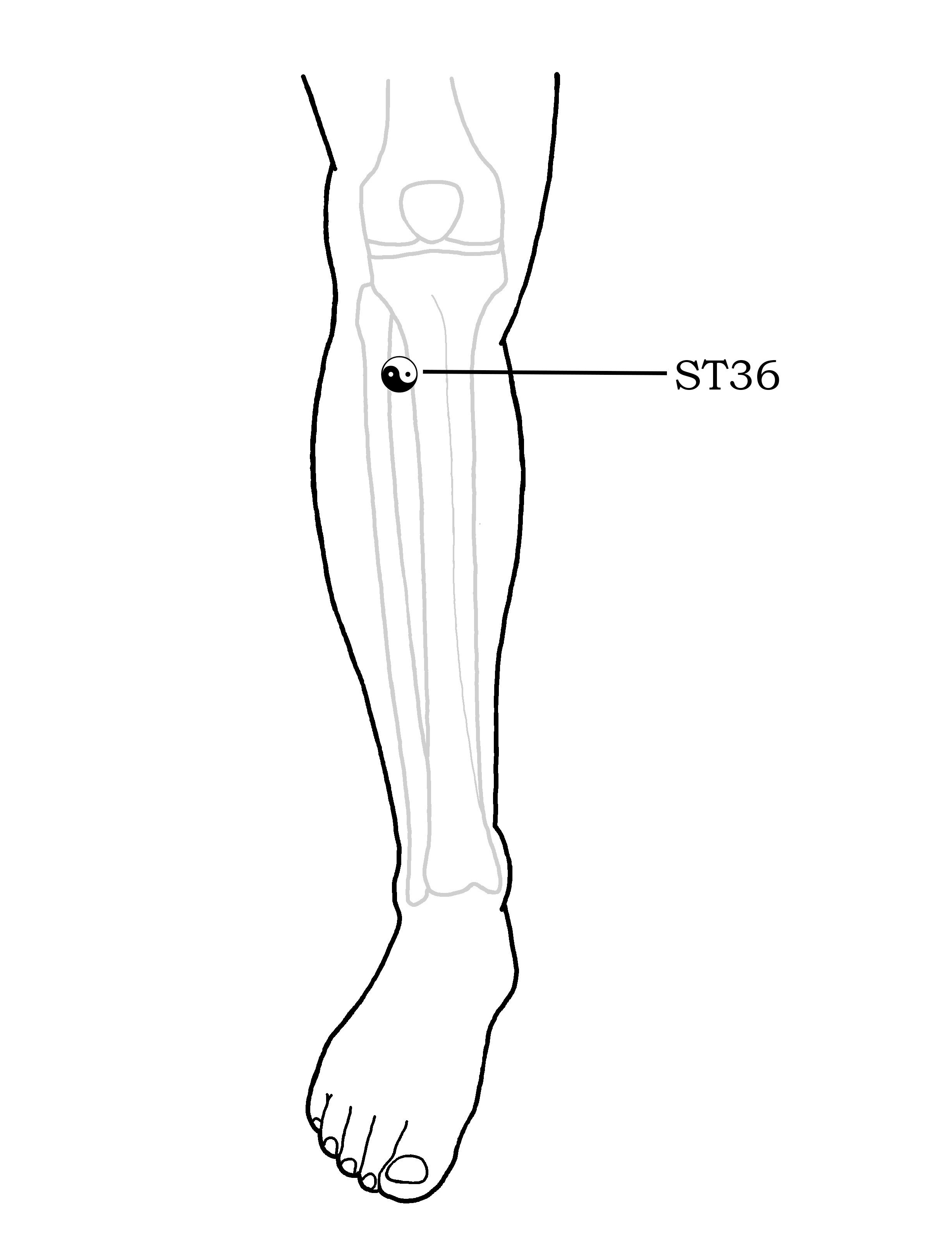 If you close your fingers together, Zhusanli is located 4 fingerbreadths down from the knee and 1 fingerbreadth lateral (on the outer edge) to the crest of the tibia (your shin bone). For those of you familiar with oriental medicine proportional measurements, that’s 3 cun below the knee, and 1 cun lateral to the crest of the tibia. To stimulate the point using simple acupressure, start by tapping for several minutes, then hold on to the point gently for 3 or 4 more minutes. You should never use enough force to give yourself a bruise, and obviously, use common sense - don’t tap and hold over an open wound or rash, etc.

Recognizable changes from acupressure sometimes take time to appear and I’ve found that consistent daily practice (and the best results) happen more often when you log your efforts. I recommend getting The Acupressure Log Book to keep yourself on track and monitor your progress. You’ll be pleasantly surprised at the results you can achieve just by doing this one simple thing consistently.

Turtles are symbols of endurance, wisdom, wealth, and longevity. Like the animal that values the earth so much that it carries it on its back, the turtle is also a symbol of how we can relate to the earth and to each other. But turtles are more than symbols, they are also animals that need our help. Many turtles are endangered by climate change, loss of habitat, commercial fishing, and over-harvesting - some species critically so. Please consider donating to one of the many turtle non-profits that are working hard to save these wonderful animals. We need these 250 million-year-old animals alive and here with us to keep the earth on its proper course and continue to inspire future generations with the secrets of heaven and earth. 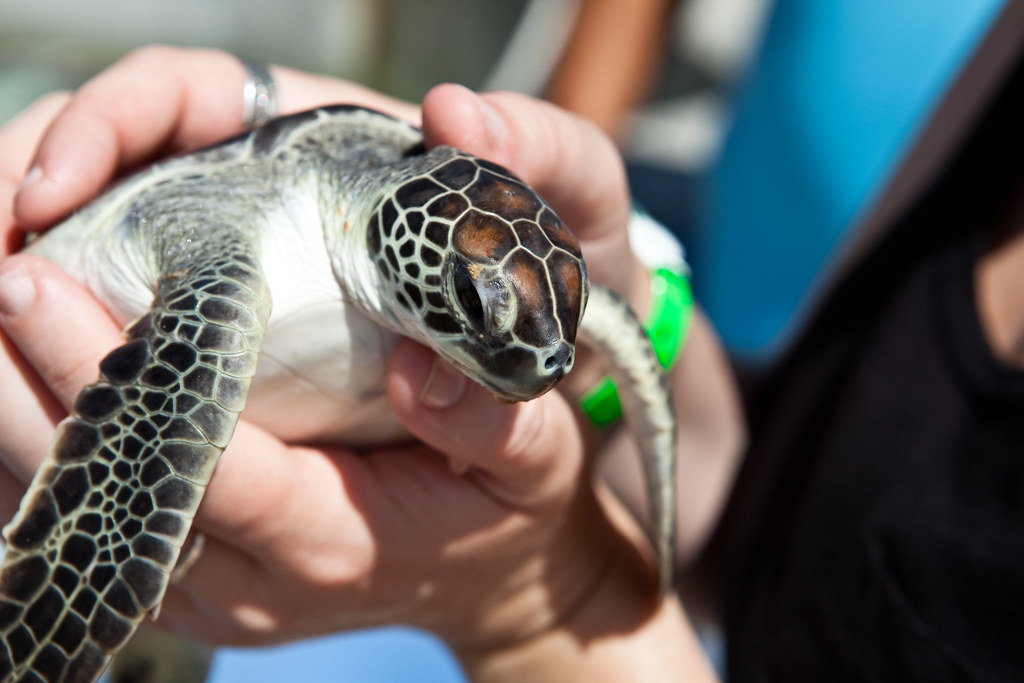 "Tripod, the Green Sea Turtle" by motleypixel is licensed under CC BY-ND 2.0

"Baby sea turtle" by TenSafeFrogs is licensed under CC BY 2.0